The OJCS will be holding Truth and Reconciliation week the week of September 27th.  The OJCS library has many great book selections for our youngest to our oldest students on both residential schools and on indigenous culture and traditions.  Included in this post are two storytime videos that you can use with your students.  One is specifically about residential schools but is very sensitively written for even the youngest students.  The other video is an indigenous folk tale. 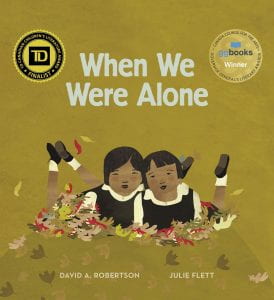 When We Were Alone by David A. Robertson and Julie Flett

A young girl notices things about her grandmother that make her curious. Why does her grandmother have long, braided hair and beautifully coloured clothing? Why does she speak Cree and spend so much time with her family?  As she asks questions, her grandmother shares her experiences in a residential school, when all of these things were taken away.  Suggested for grades K-4

I have recorded a video of this story as well… 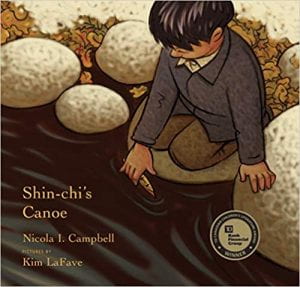 Shin-chi’s Canoe by Nicola I. Campbell and Kim LaFave

When they arrive at school, Shi-shi-etko reminds Shinchi, her six-year-old brother, that they can only use their English names and that they can’t speak to each other. For Shinchi, life becomes an endless cycle of church mass, school, and work, punctuated by skimpy meals. He finds solace at the river, clutching a tiny cedar canoe, a gift from his father, and dreaming of the day when the salmon return to the river — a sign that it’s almost time to return home. This poignant story about a devastating chapter in First Nations history is told at a child’s level of understanding.  Suggested for grades 2-4 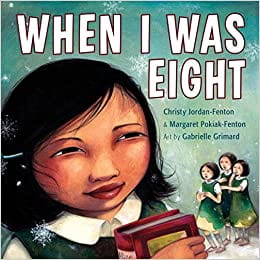 Olemaun is eight and knows a lot of things. But she does not know how to read. Ignoring her father’s warnings, she travels far from her Arctic home to the outsiders’ school to learn. The nuns at the school call her Margaret. They cut off her long hair and force her to do menial chores, but she remains undaunted. Her tenacity draws the attention of a black-cloaked nun who tries to break her spirit at every turn. But the young girl is more determined than ever to learn how to read.  Suggested for grades 5-6 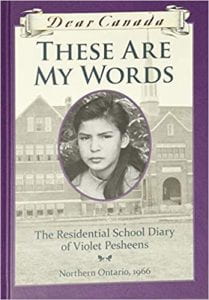 These Are My Words by Ruby Slipperjack

Violet Pesheens is struggling to adjust to her new life at residential school. She misses her Grandma; she has run-ins with Cree girls; at her “white” school, everyone just stares; and everything she brought has been taken from her, including her name―she is now just a number. But worst of all, she has a fear. A fear of forgetting the things she treasures most: her Anishnabe language; the names of those she knew before; and her traditional customs. A fear of forgetting who she was.

Her notebook is the one place she can record all of her worries, and heartbreaks, and memories. And maybe, just maybe there will be hope at the end of the tunnel.

Drawing from her own experiences at residential school, Ruby Slipperjack creates a brave, yet heartbreaking heroine in Violet, and lets young readers glimpse into an all-too important chapter in our nation’s history.  This book is suggested as a chapter book read-aloud for grades 6-8. 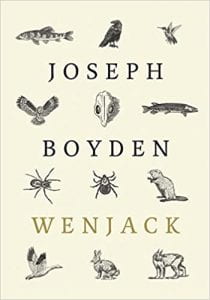 An Ojibwe boy runs away from a North Ontario Indian School, not realizing just how far away home is. Along the way he’s followed by Manitous, spirits of the forest who comment on his plight, cajoling, taunting, and ultimately offering him a type of comfort on his difficult journey back to the place he was so brutally removed from.

Written by Scotiabank Giller Prize–winning author Joseph Boyden and beautifully illustrated by acclaimed artist Ken Monkman, Wenjack is a powerful and poignant look into the world of a residential school runaway trying to find his way home.  This book is a short chapter book read-aloud recommended for grade 8. 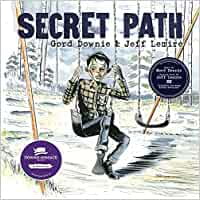 Secret Path is a ten song digital download album by Gord Downie with a graphic novel by illustrator Jeff Lemire that tells the story of Chanie “Charlie” Wenjack, a twelve-year-old boy who died in flight from the Cecilia Jeffrey Indian Residential School fifty years ago.

Chanie, misnamed Charlie by his teachers, was a young boy who died on October 22, 1966, walking the railroad tracks, trying to escape from the Cecilia Jeffrey Indian Residential School to return home. Chanie’s home was 400 miles away. He didn’t know that. He didn’t know where it was, nor how to find it, but, like so many kids—more than anyone will be able to imagine—he tried.  This oversize graphic novel is suggested for grade 8. 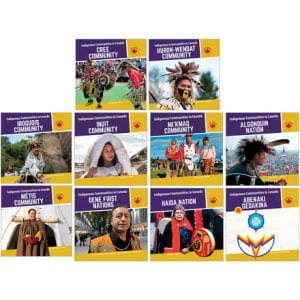 Indigenous Communities in Canada Series (available in French and English)

Approximately 1.4 million Indigenous people live in Canada today. They come from a large number of communities, each with its own history, language, and cultural practices. Indigenous Canadian Communities in Canada will explore the lives of Indigenous people, both in the past and in current times.  Recommended for grades 3-8. 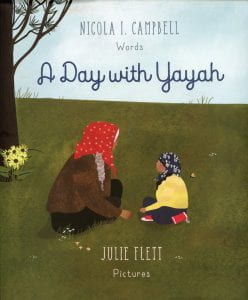 A Day With Yayah by Nicola I. Campbell and Julie Flett

Set in the Nicola Valley, British Columbia, in Canada’s westernmost province, a First Nations family goes on an outing to forage for herbs and mushrooms. A grandmother passes down her knowledge of plant life and the natural world to her young grandchildren.  Suggested for grades JK-2 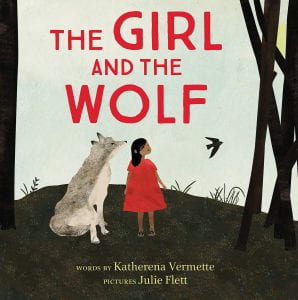 The Girl and the Wolf by Katherena Vermette and Julie Flett

While picking berries with her mother, a little girl wanders too far into the woods. When she realizes she is lost, she begins to panic. A large grey wolf makes a sudden appearance between some distant trees. Using his sense of smell, he determines where she came from and decides to help her. Through a series of questions from the wolf, the little girl realizes she had the knowledge and skill to navigate herself-she just needed to remember that those abilities were there all along.  Suggested for grades JK-2

Here is a video in which I read The Girl and the Wolf that I recorded last year.  I queued up this video to start at the beginning of this book. 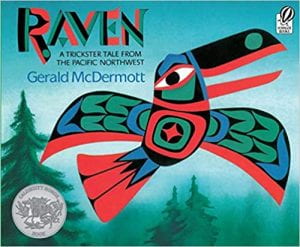 Raven – A Trickster Tale from the Pacific Northwest by Gerald McDermott

Raven, the trickster, wants to give people the gift of light. But can he find out where Sky Chief keeps it? And if he does, will he be able to escape without being discovered? His dream seems impossible, but if anyone can find a way to bring light to the world, wise and clever Raven can!  Suggested for grades JK-2 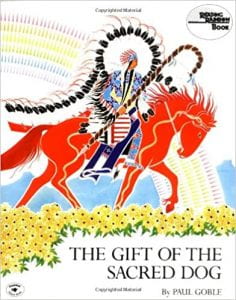 The Gift of the Sacred Dog by Paul Goble

A brave boy goes into the hills and prays for help for his people. A rider on a magnificent animal comes to him and says: “This animal is called the Sacred Dog. He can do many things your dogs can do and also more…He is as the wind: gentle but sometimes frightening.” The clouds close and suddenly one by one countless Sacred Dogs course down from the sky. And so the courage of one determined boy is rewarded by the Great Spirit: The horse, or Sacred Dog, is given to his tribe.  Suggested for grades 2-6 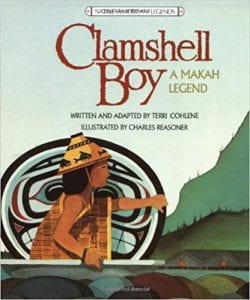 Wicked Basket Woman is stealing children to eat. Can clever Clamshell Boy come up with a way to trick the witch?

The Legends of the World opens readers’ minds to the diverse cultures of Native America, Asia, Africa, the Caribbean, Eastern Europe, and the Americas through enchanting tales passed down through countless generations. Each book in the series features geographical, historical, and cultural information. Illustrated in full color.  Suggested for grades 3-8 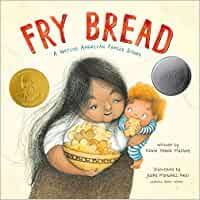 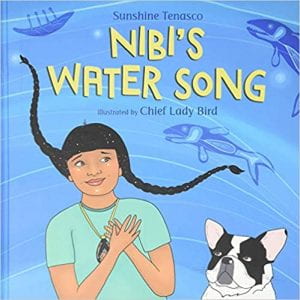 Nibi is the Anishinaabemowin word for water. In Nibi’s Water Song , an Indigenous girl on the search for clean water to drink. Though she is faced with repeated obstacles, Nibi’s joyful and determined energy becomes a catalyst for change and action as her community, and then in widening circles the country and government, rally around her to make clean drinking water available for all. In a story perfectly levelled for young readers, there is a strong underlying message that even when a problem seems too large to face, every bit that everyone does helps. And inaction in the face of a wrong is not an option.  Recommended for grades 3-6. 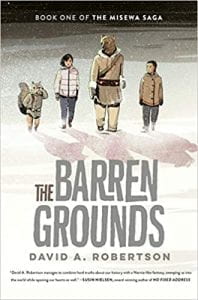 The Barren Grounds by David A. Robertson

Morgan and Eli, two Indigenous children forced away from their families and communities, are brought together in a foster home in Winnipeg, Manitoba. They each feel disconnected, from their culture and each other, and struggle to fit in at school and at their new home — until they find a secret place, walled off in an unfinished attic bedroom. A portal opens to another reality, Askí, bringing them onto frozen, barren grounds, where they meet Ochek (Fisher). The only hunter supporting his starving community, Misewa, Ochek welcomes the human children, teaching them traditional ways to survive. But as the need for food becomes desperate, they embark on a dangerous mission. Accompanied by Arik, a sassy Squirrel they catch stealing from the trapline, they try to save Misewa before the icy grip of winter freezes everything — including them.  Recommended as a read aloud for grades 5-8.