‘I Didn’t Do My Homework Because…’ Fun Creative Writing

One of my favourite picture book artists right now is French artist Benjamin Chaud who worked with French author, Davide Cali, to create a hilarious series of books about excuses.  The one I read with our grade 3 and 4 students is called I Didn’t Do My Homework Because… 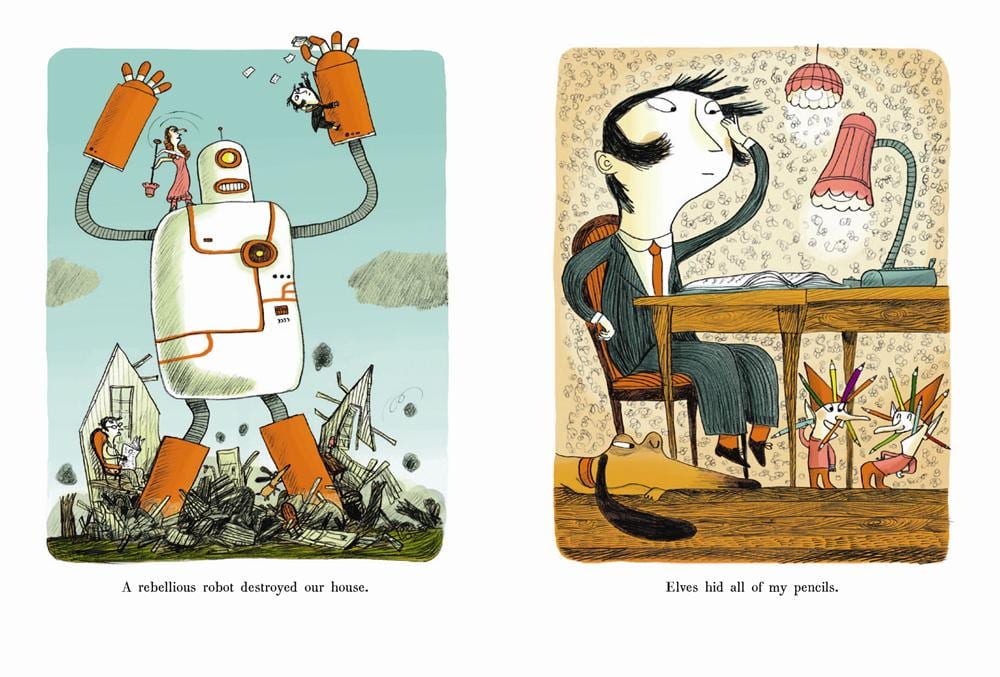 After reading the book to students I set them to work creating their own silly excuses and doodles in just 10 minutes. 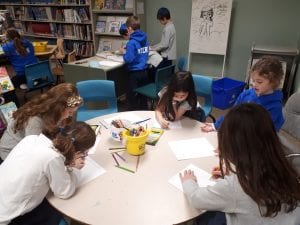 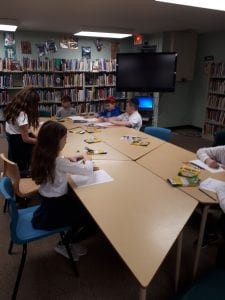 They then got the opportunity to share their excuses with the class, which they were all very excited to do.

They had so much fun with this activity and it was so easy to pull off.  Their amazing excuses are on display in the hall downstairs.  Make sure to check them out so you don’t get fooled when you hear them in class. 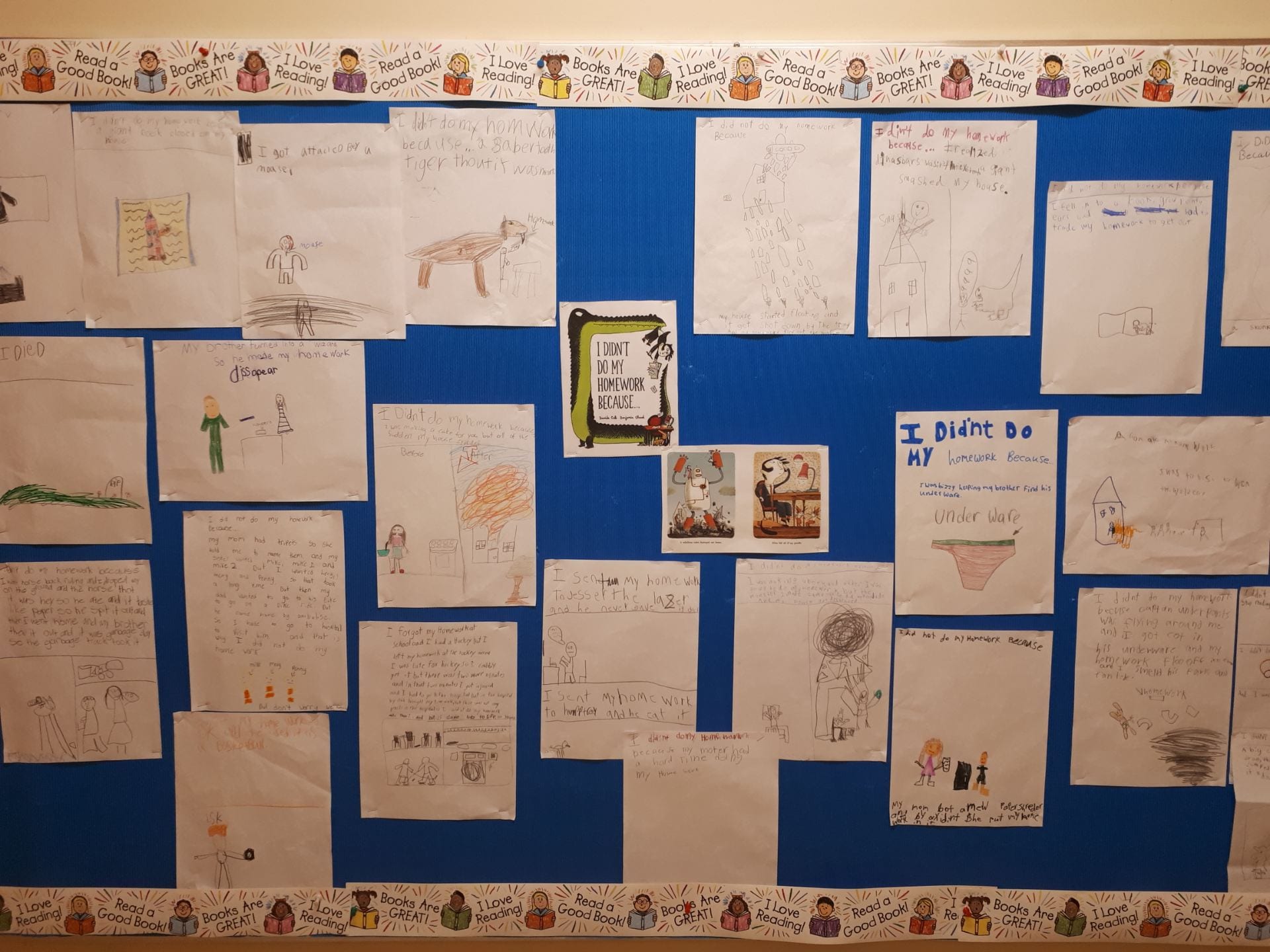 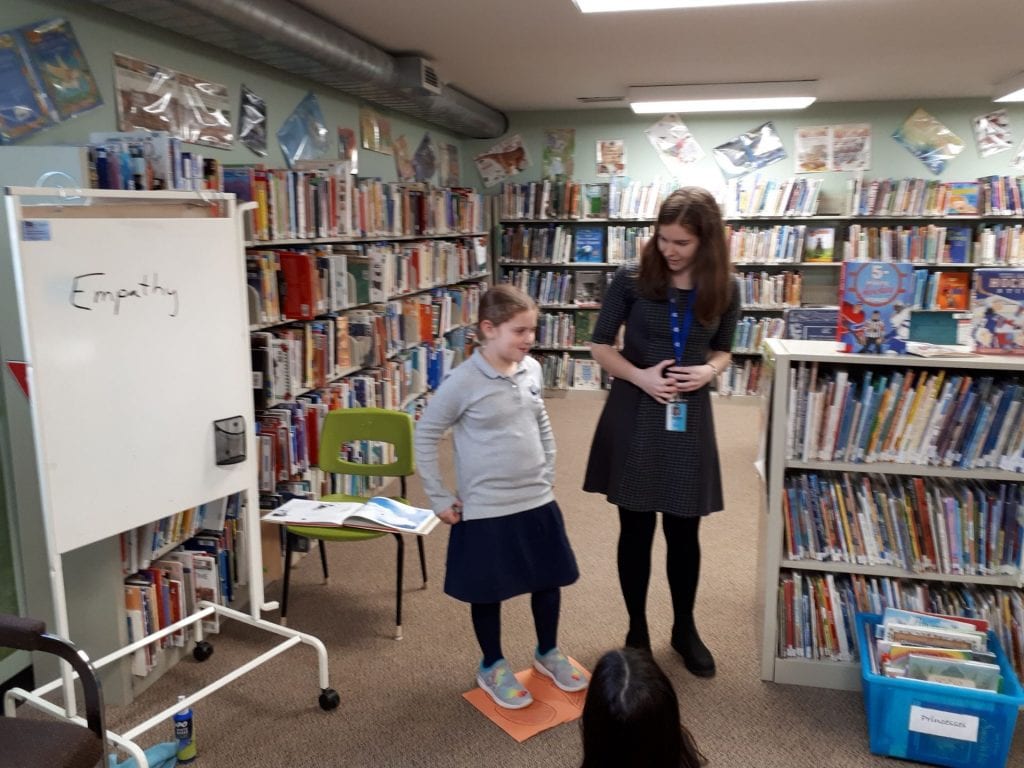 I got the opportunity to collaborate with our wonderful school counselor Shannon for a Well-Being Book Series session for our Kindergarten to grade 4 classes.  It was Kindness Week at the OJCS and the focus today was empathy.  Our students got to learn a very valuable lesson about the meaning of empathy and how it feels to ‘stand in someone else’s shoes.’

We started off the session by reading each group a book.  For our K and 1 groups we read ‘When I Care About Others’ by Cornelia Maude Spelman.  It is a very simple book but a valuable teaching tool for younger students. 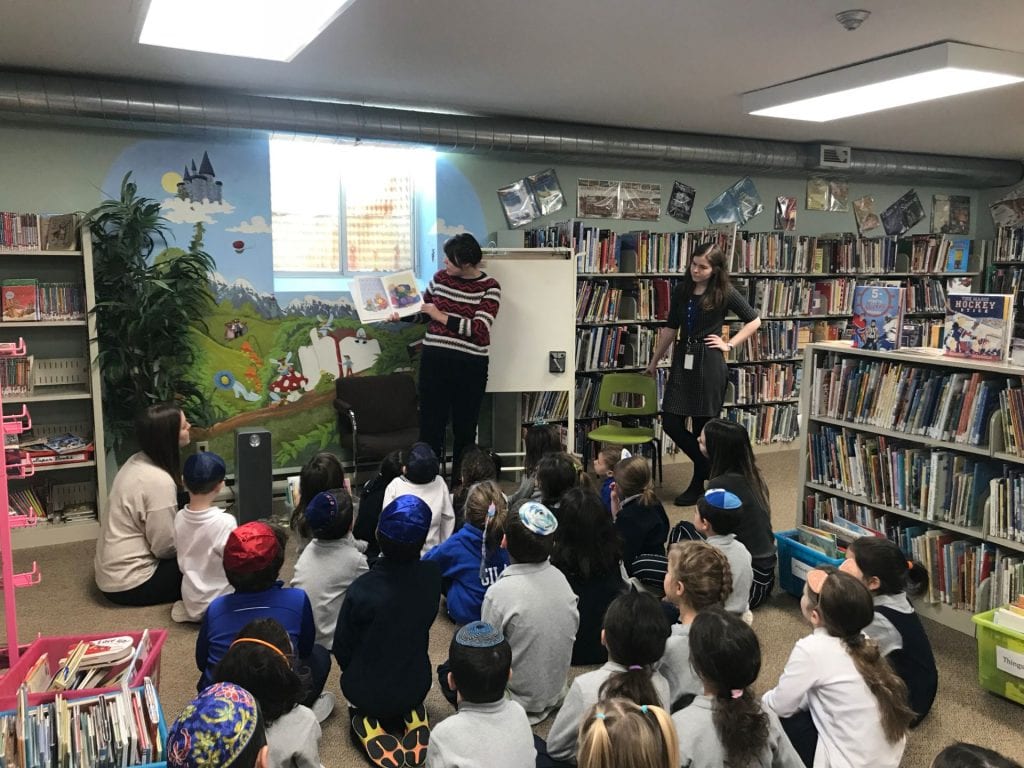 For our grade 2 to 4s, we read a beautiful book called ‘The Three Questions’ by Jon J. Muth about a boy who is trying to answer three important questions; 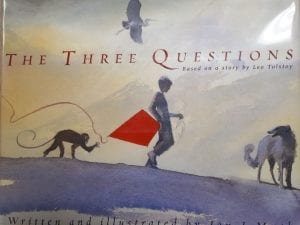 After reading the story Shannon discussed the word ‘Empathy’ with the students and then did an exercise where they took turns standing on a pair of shoe prints and imagining what others would feel in made-up scenarios. 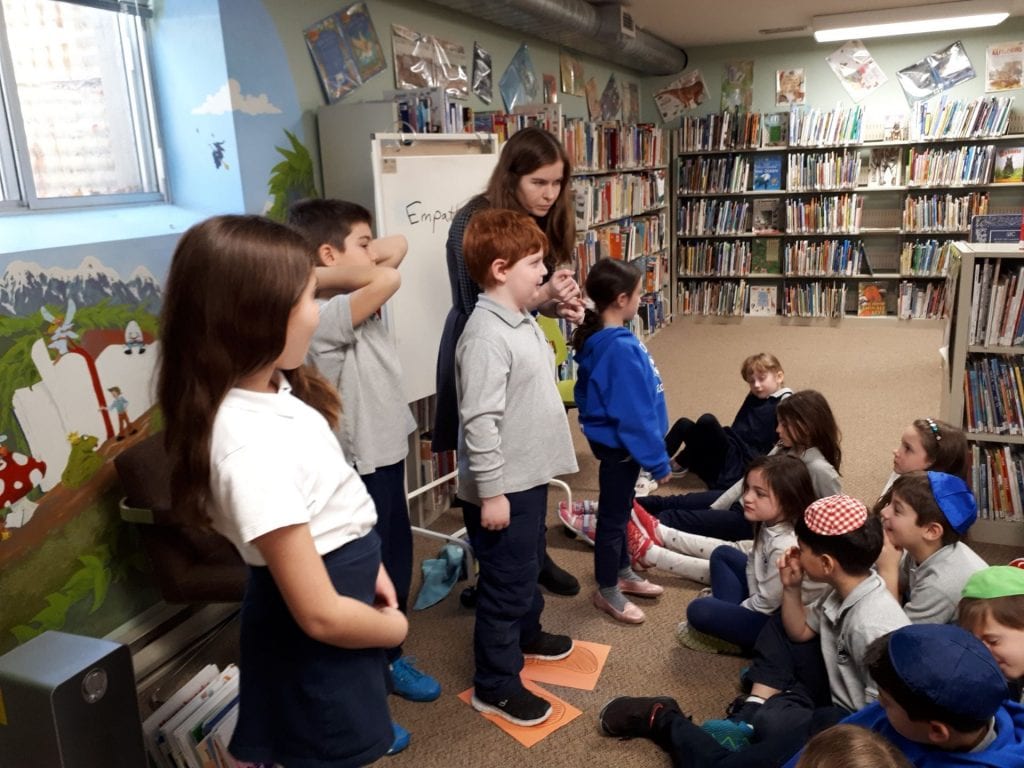 The kids loved the exercise and the stories.  I am really looking forward to working more with Shannon on this book series and can’t wait to choose books for our next session! 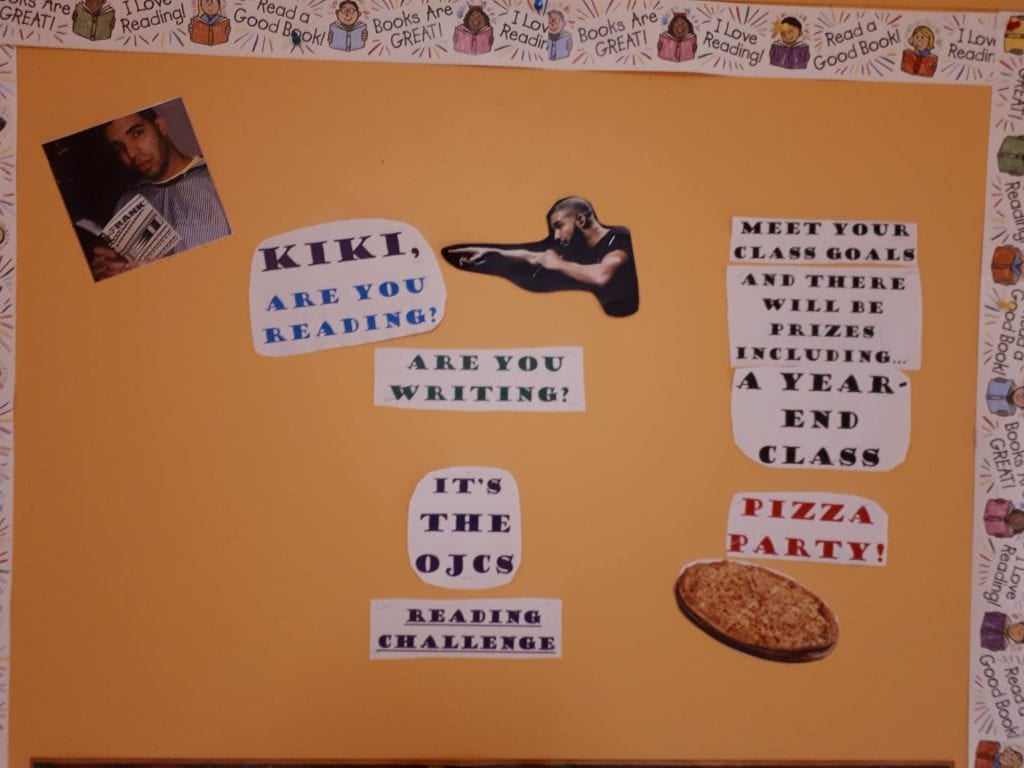 This week we launch our school-wide reading challenge!

Each teacher will decide on the number of books they want their class to aim to read from Nov 19th to May 1st as a group sum total.  This number should be a challenge but still very much attainable.

There is a list of categories that will be handed out to help direct student choices across a wide range of genres.  Each student (and teacher) will contribute to this class total, and when a book is finished, that student will post a brief book review on the school’s new library website (if the book was a library book.)  https://theojcs.booksys.net/opac/ojcs/

The prize is an end-of-year pizza party where there is the optional component that students can come to school dressed as their favourite literary character.  The second piece of this is that the students who meet or exceed reading from all of the categories will be recognized for their hard work and contribution to the class at an end-of-year assembly.

We are so excited to get going!

This week and next week the library is running workshops on online safety and good digital citizenship.  The kids have been loving these workshops because the way they are learning these lessons is through an amazing Google game called ‘Interland‘.  This game is designed to guide students through four levels, each dealing with a particular issue. 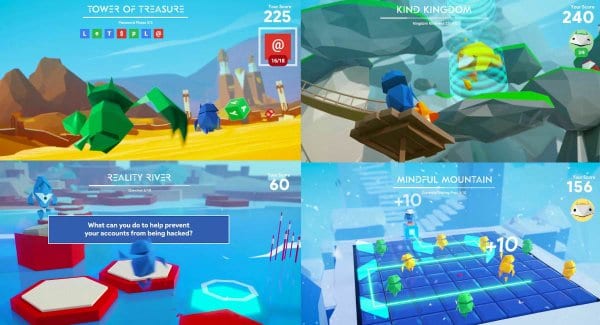 The kids enjoyed the game so much they were asking to stay over recess and continue.  Our discussions before the game indicated that the children knew very little about how to protect themselves online.  But they took away so much from the game that our discussion after playing it was very rich.  I will be sharing this link with other grades and parents as I think this is a great tool for educating any student, not just the young ones. 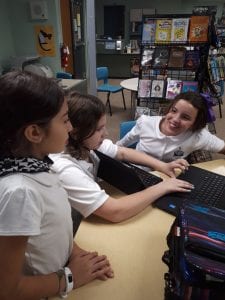 The library has kicked off this year’s middle school research skills workshop series with a lesson on credible websites vs. non-credible websites and identifying fake news.  The students were asked to be detectives and jot down some of the ways you can identify which sites and articles are real and which are fakes.

Developing critical thinking is a skill that needs more attention than it gets.  Forbes reports that 75% of adults are fooled by fake news.

I had students looking at websites about explorers.  One of them was completely fake.  What I found interesting was that even information that seems very obviously ridiculous to an adult, such as a claim that Samuel de Champlain went to Disney World to celebrate winning ‘Best Fort of the Year’ from ‘Better Forts and Ramparts Magazine’, caused students to actually need to look up how long Disney World has been open because they weren’t sure if this could actually be a possibility.

On our fake news exercise, some students weren’t sure if Justin Trudeau was building a wall or not.  That is why it is so important to follow the rule of three and always compare three sources of information. 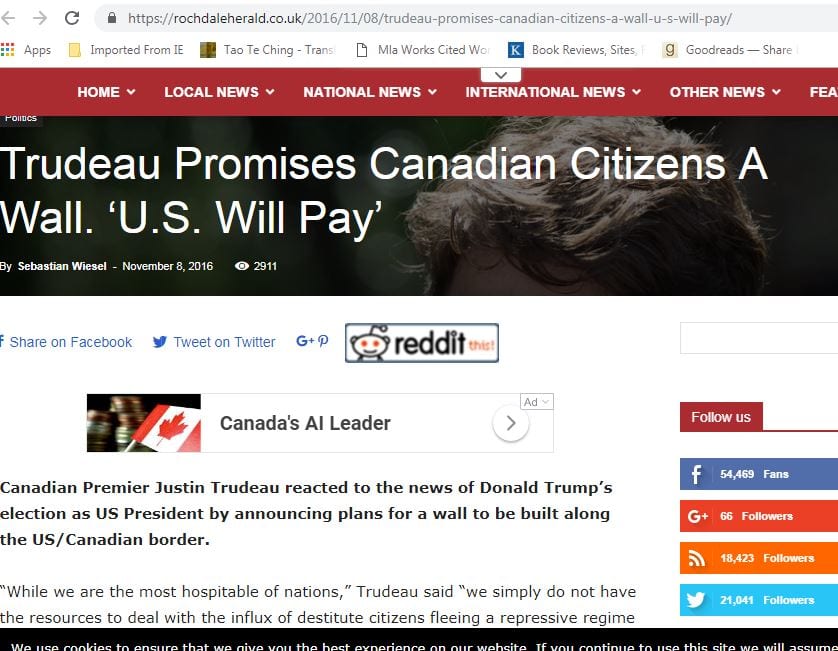 Is Justin Trudeau building a wall? The kids don’t know!

These videos show a few clever teams who immediately went to the ‘About’ page on the news article or website they suspected was fake to learn more about the source.  It is important that they learn to look outside of the site to find out more as well.

I think it is also important not to take for granted when you are working with kids that something that seems very obvious to an adult is not very obvious to students in a time where when information is presented in a way that looks legitimate it is taken seriously.

My favourite part of this activity was showing the students the fake website Pets or Food where you can buy exotic animals either alive or dead.  It is scary just how realistic this site is and that’s what makes it such a great example. 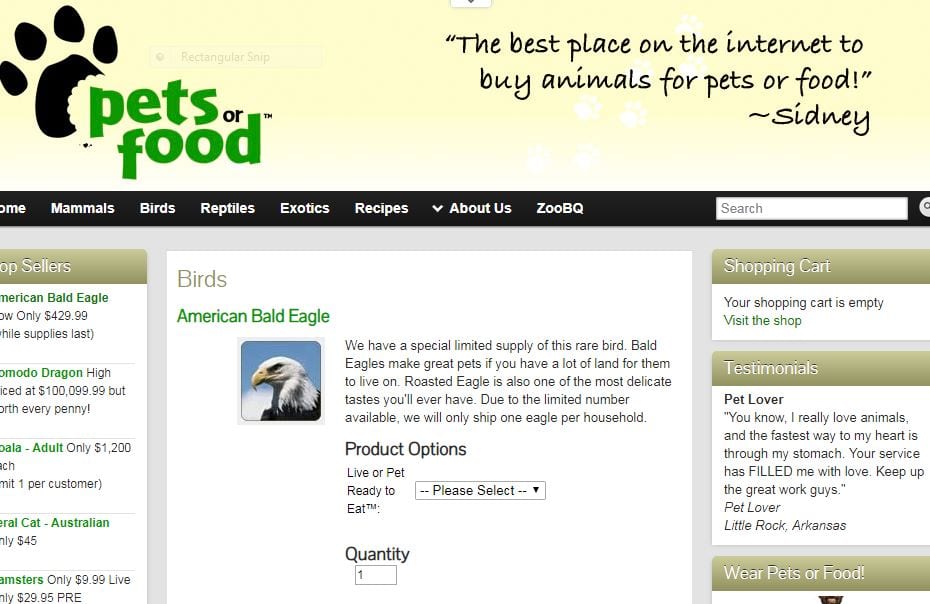 I think we all had fun and it was very eye-opening; from my perspective as an observer of this exercise to see how much work we need to do, and their perspective when they came to see how easily they could be duped.  This workshop series will tie in nicely to future topics such as being safe online.