Summer Reading for Grades K to 1 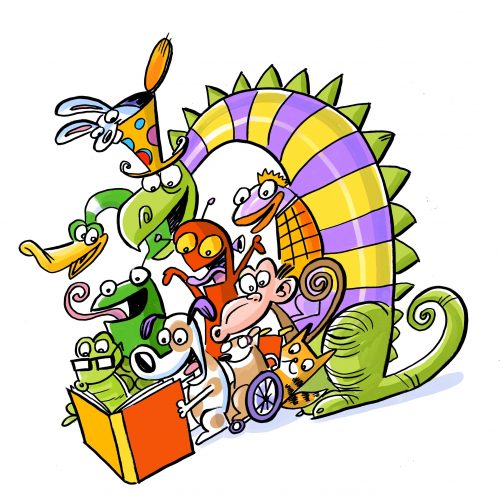 Summer break is coming up really quickly and summer reading is so critical to avoid learning loss in children.  Here is a list of amazing books that you can look for at your public library or favourite book store to keep your kids immersed in books until September. 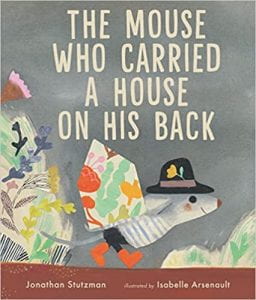 When an ordinary spot on a grassy hill calls out to him, Vincent puts down the house he carries on his back and knows he’s where he needs to be. As hungry and tired travelers pass by, Vincent welcomes them into his home, making room for everyone. And even when it seems that the house is as full as it possibly can be, there is no woodland animal so big or so scary—not a ravenous cat, nor a fox, nor a whole herd of deer—that Vincent would turn it away from his warm, magical home on the hill. Jonathan Stutzman’s charming voice is enhanced by the elegant, inventive die-cut art of three-time Governor General’s Award winner Isabelle Arsenault in this classic tale of a generous little mouse with a special house and an ever-expanding heart. 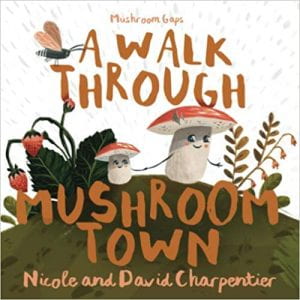 A Walk Through Mushroom Town by Nicole and David Charpentier

Walk home with two Mushroom gap brothers, Lona and Acorn as the sun sets and the moon rises in Mushroom Town. This book is a perfect short-and-sweet bedtime read for your little one. 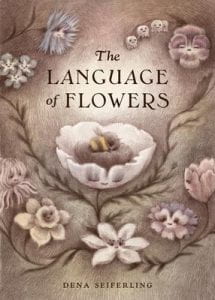 The Language of Flowers by Dena Seiferling

An adopted bumblebee learns the language of flowers from her floral family in this enchanting picture book, inspired by floriography, that celebrates one of nature’s most important relationships. 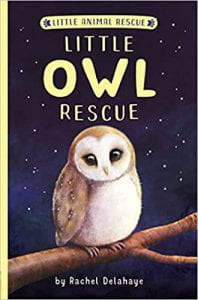 One night at the carnival, Callie and her friend Gabriel decide to go on the flying swings. As they spin higher and higher in the air, Callie suddenly feels huge gusts of wind, and she can’t see anything in front of her. When the ride stops, she finds herself alone on an expanse of farmland. She knows that she has been brought there to help an animal, and soon, she discovers a barn owl family. Then the mother disappears and leaves an owlet behind! Knowing she must do something to help the baby bird. Callie leaps into action. But with night closing in and dangerous animals all around, Callie will need her tiny friend’s help as much as it needs hers…. 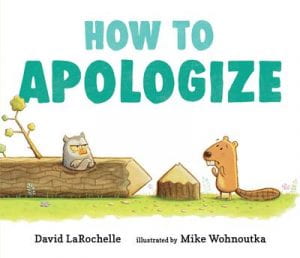 Wouldn’t the world be a better place if everyone knew how to apologize? Luckily, this humorous guidebook is full of practical tips about when, why, and how to say you’re sorry. From a porcupine who accidentally popped his friend’s balloon to a snail who was running so fast he stepped on a sloth’s toes, hilarious examples and sweet illustrations abound. For both listeners who are just learning and older readers who need a refresher, this book will come as a welcome reminder that even though apologizing can be hard, it doesn’t have to be complicated. 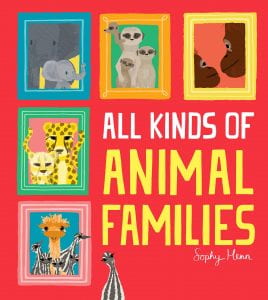 All Kinds of Animal Families by Sophy Henn

An all-embracing celebration of all kinds of animal family life, reflecting the different ways children live today. From a clownfish mommy and daddy to cheetah daddies who adopt cubs, every combination of modern human family life is reflected here. It’s a warm and friendly introduction to the topic for pre-school children, concluding that love is the common factor among all families. 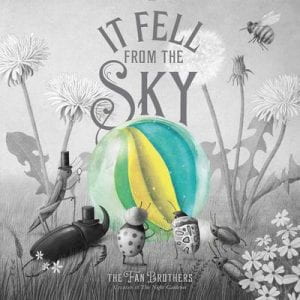 It Fell From the Sky by The Fan Brothers

It fell from the sky on a Thursday.
None of the insects know where it came from, or what it is. Some say it’s an egg. Others, a gumdrop. But whatever it is, it fell near Spider’s house, so he’s convinced it belongs to him.
Spider builds a wondrous display so that insects from far and wide can come look at the marvel. Spider has their best interests at heart. So what if he has to charge a small fee? So what if the lines are long? So what if no one can even see the wonder anymore?
But what will Spider do after everyone stops showing up? 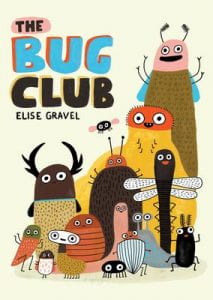 The Bug Club by Elise Gravel

In The Bug Club, Elise Gravel shares all of her favourite and most interesting facts about these marvelous creatures, some of which are so unique and strange, you could almost imagine them living in outer space! 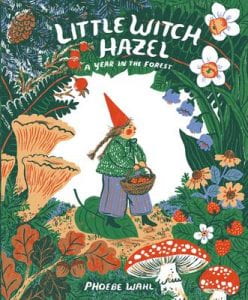 An earthy and beautiful collection of four stories that celebrate the seasons, nature, and life, from award-winning author-illustrator Phoebe Wahl.

Little Witch Hazel is a tiny witch who lives in the forest, helping creatures big and small. She’s a midwife, an intrepid explorer, a hard worker and a kind friend.
In this four-season volume, Little Witch Hazel rescues an orphaned egg, goes sailing on a raft, solves the mystery of a haunted stump and makes house calls to fellow forest dwellers. But when Little Witch Hazel needs help herself, will she get it in time? 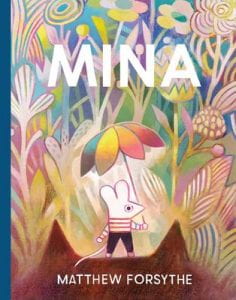 From the creator of the acclaimed and beloved Pokko and the Drum comes an emotionally resonant picture book about trust, worry, and loyalty between a father and daughter. 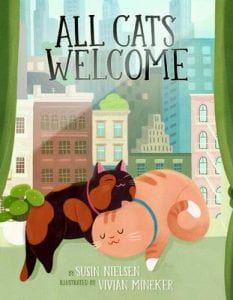 All Cats Welcome by Susin Nielsen and illustrated by Vivian Mineker

Leonard adores his human. “Stay! Let’s play!” he says when it’s time to leave for work. His human just hears “Meow.”
Sometimes Leonard gets lonely. So does Mariposa, who is new in town. Maybe they could keep each other company? “Hello,” says Leonard. “Hola,” says Mariposa.
While the friends don’t share a language, they do share adventures. And together they find a place where all cats—and their humans—are welcome. 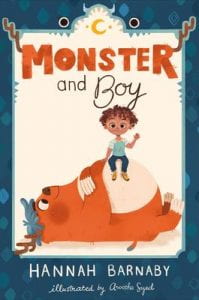 Monster and Boy by Hannah Barnaby

Fall in love with the friendship between Monster and Boy in this exciting new chapter book series from writer Hannah Barnaby and illustrator Anoosha Syed.

When Monster (who lives under the bed) meets Boy (who sleeps in the bed), Boy starts to scream—and Monster promptly swallows him. It’s the beginning of a beautiful friendship!
Told with a warm, cozy voice, the story is brought to life with adorable two-color illustrations. Filled with adventure and humor, this chapter book is perfect for sharing with kids just aging out of picture books and for newly independent readers. 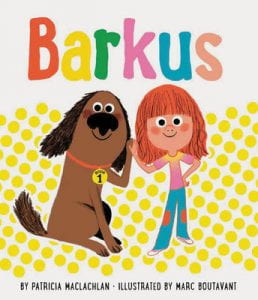 Barkus by Patricia Maclachlan and illustrated by Marc Boutavant

The exuberant Barkus and his lucky young owner jump, whirl, and twirl across the pages of this critically celebrated series from a Newbery Medal–winning author. The straight-forward text is accessible for even the newest independent reader, while the warm, humorous story and vibrant, energetic images make this an ideal choice for picture book readers and advanced readers as well. 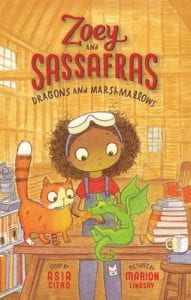 Zoey and Sassafras by Asia Citro and illustrated by Marion Lindsay

With magical animals, science, mystery, and adventure — the brand new series Zoey and Sassafras has something for everyone! Easy-to-read language and illustrations on nearly every page make this series perfect for a wide range of ages.
In the first book of this series, Zoey discovers a glowing photo and learns an amazing secret. Injured magical animals come to their backyard barn for help! When a sick baby dragon appears, it’s up to Zoey and Sassafras to figure out what’s wrong. Will they be able to help little Marshmallow before it’s too late? 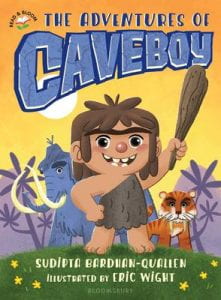 Meet Caveboy! Ooga booga!
Caveboy is just like any other boy . . . he loves playing base-skull, running really fast, and especially whacking things with his club. But when his club breaks, he will need to find a new one . . . which just might lead him to a new friend. In this first book, Caveboy will find the perfect club, meet his best friend, and learn to be brave!